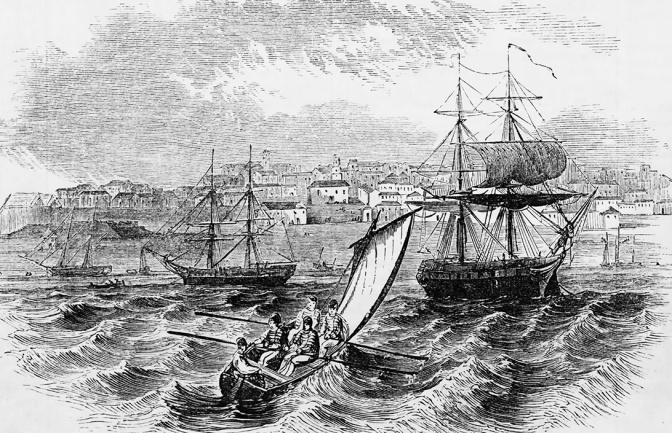 In 1839 Cornelius C Cox, thirteen years old, obtained a warrant as a Midshipman in the Texian Navy. It was an exciting time for the Navy and the Republic, because the government had finally invested significant funds in establishing a naval force, and the new ships were beginning to arrive. In many respects, as noted in Jonathan Jordan’s Lone Star Navy, 1839 would be the zenith year for the Texian Navy. Things would never be quite so bright again.

Cox, it turned out, learned quickly that he was not well suited for naval life, and left the service the following year, but not before nearly dying from yellow fever and participating in some of the Navy’s actions on the Mexican coast and the Yucatán. Here, in a memoir published many years later, Cox describes his arrival at Galveston, ready to report aboard his first naval vessel. The spelling and punctuation are as in the original.
_____

My Bro & sister ever anxious about my educational necessities, thought they saw a solution of the matter, in the opportunities offered in the Texas Navy. Accordingly an appointment was obtained for me as midshipman, and orders furnished me to report to the Commanding officer at Galveston.

Now at this time the city of Galveston was not the attractive place that it is 50 years later. The population probably didnt exceed 2000, the Houses were plain wooden structures ranging from the little 10×12 shanty to the somewhat pretentious, storehouse, and here & there a respectable looking dwelling and of course the indipensible Hotels, which were ample for the needs of Town. The wharves which in later years have formed a bulwark for the city from the storms and waves that come clown from the North. . . had not been built — and on the occasion of my first visit, the steamer ran head on to the shore — or as near as the water would allow and the passengers disembarked on staging from the Boat to the Shore. The storm which had swept over the Island in ‘37, had left many reminders of the visit. One schooner was imbedded in the sand just where we landed. I saw another at the Sand Hills over on the Gulf side of the Island. But our new Navy rode at anchor in the harbor and made cheerful the otherwise gloomy prospect.

The Brig WHARTON, & Schooners SAN JACINTO SAN BERNARD & SAN ANTONIO were in port when I went down, my orders were to report on Board the WHARTON, which vessel was under sailing orders for New York, but when I presented my papers, the WHARTON already had her complement of middys — and I was assigned to the Schooner SAN JACINTO. And now began an experience and mode of life for which I soon discovered I was not intended.

“Snotty” was a disparaging slang term for a midshipman.