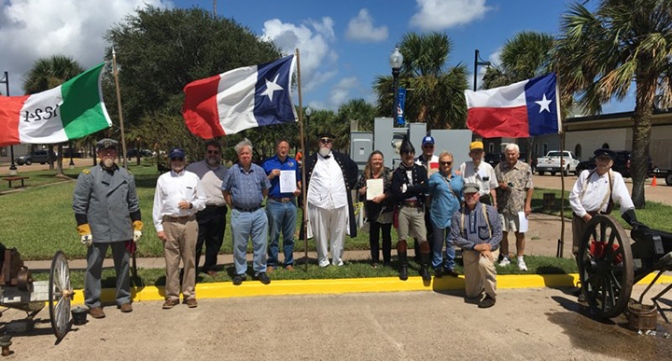 Texian Navy Day at the Freeport Historical Museum was a great success, thanks to the hard work of its organizers, LaAnne Strahan, Adm Nat Hickey, Adm. Michael Bailey, and museum staff and volunteers. They put together a strong program that covered a lot of territory.

Some of the weapons offered Texian colonists by the “Major,” Flem Rogers. All are original pieces.

Presentation of the TNA film, “How the Texas Navy Saved the Revolution.”

I was privileged to talk about the Search for the Invincbible. Flem Rogers, of the Brazoria Historical Militia, appeared in uniform as a U.S. Army officer (right), traveling in Mexican Texas, trying sell arms to the American colonists and discussing the uses, advantages, and disadvantages of each type. Adm. Bill Turner presented the TNA-produced educational film, “How the Texas Navy Saved the Revolution.” Adm. Michael Bailey presented a session on the tools and weapons that would have been used by both civilian and merchant seamen of the period. Finally, the event concluded with a cannon firing – four rounds each! – of two guns by Dale Thames and Adm. Frank Deetz.

Thanks to all who came out and made a memorable day!