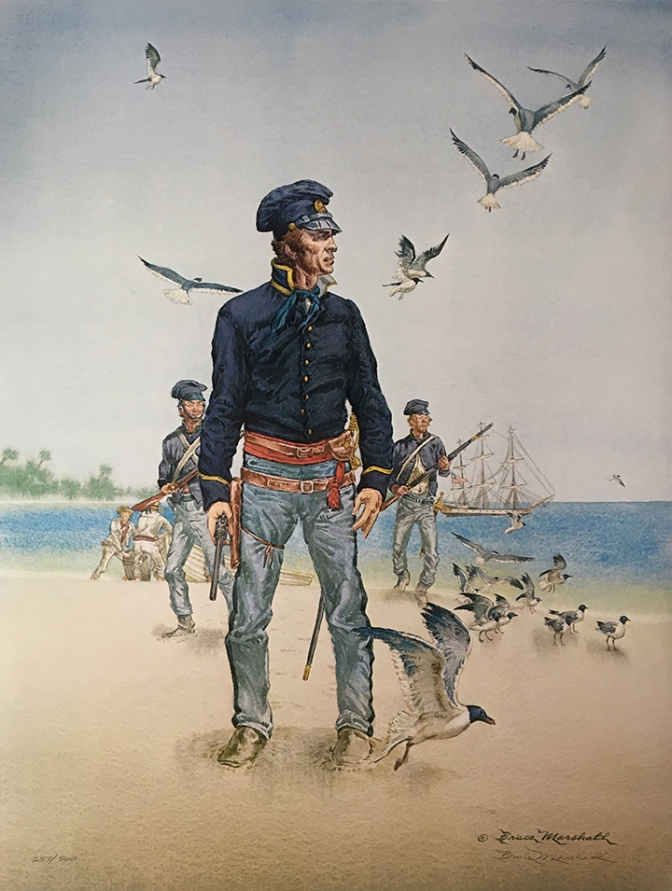 One of the members attending Saturday’s TNA board meeting brought along a document from his personal collection to share with the group. It’s a warrant issued to a Marine aboard the Texian flagship Austin in April 1841, in lieu of monies owed him. The text of the warrant reads:

The last Naval Appropriation being inadequate to satisfy the claims of the Officers, Sailors and Marines of the Texian Navy, the holder of this Certificate, or his Assignee, will be entitled to FIFTY DOLLARS upon its presentation at the Treasury, out of the first Appropriation made by Congress to meet said claims.

The warrant is signed by the state comptroller and by James W Simmons, Secretary. of the Treasury. Because the Republic of Texas was in such precarious financial straits during the ten years of its existence, and hard money (i.e., coinage) was in extremely short supply, the Republic took to issuing warrants like this in lieu of actual payment of its debts. This certificate amounts to an IOU.

The auction house that sold this document years ago gave the marine’s name as John Turningham, but I think that’s incorrect. There’s no extant record of a Turningham (including alternate spellings) serving in the Texian Navy. The first letter of the man’s surname, in the endorsement on the back, looks more like an F than a T, and that may be a clue.

While there wasn’t a Turningham known to be in the Texian Navy, either as a sailor or Marine, there was a John Finnegan, who we know from other sources was serving as a Marine Private aboard the brig Wharton in 1839, and is recorded again as Master-at-Arms aboard Wharton in 1842 – dates that span the date of the warrant. This may actually be a warrant made out to him, with his name spelled on the endorsement as “Finneghan.” Finnegan himself was apparently unable to sign his name, as he made his mark on a receipt (now in the Texas Adjutant General’s archives) in August 1839, so it appears that someone else endorsed (and presumably collected payment) on his warrant, someone who was unsure of the spelling.

There is a straightforward (if ultimately unprovable) explanation for the difference in signatures. It was very common for men who received warrants like this to sell them at a deep discount to brokers in exchange for immediate cash money. The wording of the warrant tacitly recognizes this practice, by noting that it could be redeemed either by the original recipient “or his Assignee.” Private Finnegan, finding himself in need of money, may well have sold this warrant to a broker in exchange for $20 or $30 in hard currency. (The practice was not unlike tax preparers today who will advance customers money upon filing, based on their projected tax refund, although the terms then would have been far more usurious.) The buyer might have been a merchant who traded in treasury warrants on the side, or might even have been a speculator who advanced money to sailors and Marines as the primary line of business. This was common in other areas and locations, as well — during the American Civil War, sailors would often wait many months or even years before the U.S. government would make good on the prize money owed them, giving an opportunity for speculators to buy up their warrants at a deep discount.

Was this warrant actually issued to Private Finnegan? Sure seems possible. Regardless, it’s a wonderful link to the broader story of the Texas Navy, and lives of its sailors and Marines.