Thursday evening’s meeting in the newly-christened Texas Navy Room at Waterman’s Restaurant in Galveston was a big success, thanks in large part to the efforts of Admirals Chester Barnes and Paula Morris in making the arrangements. Great venue, great food, and great times. Special thanks to Waterman’s owner Adm. Todd Edwards, for making it possible. 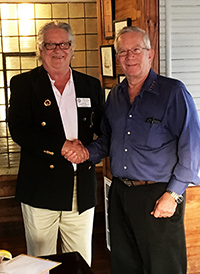 The most important event of the evening was the installation of the Hawkins Squadron’s new Deputy Commander, Adm. Jeff Kilgore (right, with Adm. Barnes). Jeff is a longtime member of the squadron as well as the Laffite Society in Galveston. We appreciate Jeff’s willingness to take on this important role, and offer him out sincere support in it.

The evening’s presentation by Adm. Andy Hall, “The Ghost and John the Drayman,” about the capture of the Mexican vessel Pelicano by the Texian schooner Liberty in 1836, was well-received. It did prompt a couple of questions, though, that need a follow-up.

One was the question about how, exactly, Liberty‘s crew took possession of a boat from the (neutral) American schooner Sabina, that proved to be instrumental in capturing Pelicano. Several sources are a little vague about how this came about. In his memoir Wild Oats Sowings, written years later, one of Liberty‘s crew, Samuel Cushing, described how his fellows were able to secure the boat unnoticed, that had probably been left astern on a painter, because Sabina failed to keep a proper anchor watch. Cushing tells how he himself clambered aboard the American vessel and requested the the loan of the boat from her master and, after he refused, showed him that the armed Texians had already seized it. At that point, according to Cushing, the master relented and simply asked that it be returned safely when the Texians were done with it.

After the event, though, the crew of Sabina told story of the seizure that had had somewhat more violent overtones, including the entirely spurious allegation that the Texians had subsequently killed everyone on board Pelícano. As Adm. Bill Rouse pointed out, that’s exactly what the crew of Sabina would’ve said, to avoid the liability with both Sabina‘s owners and insurers for the loss of the boat. And indeed, in his own account, Samuel Cushing claims to have suggested doing just that, recalling “and in regard to any
trouble with the Mexican authorities, I hinted that [Sabina‘s master] could excuse himself by asserting that the boat was taken by force, which was, indeed, true to the letter.”

(According to Cushing, in the subsequent fight Liberty’s one remaining boat got loose and drifted away, leaving that schooner with none of her own, so they decided not to return Sabina‘s boat after all. The Texian Commissioners at New Orleans eventually reimbursed Sabina‘s owners $140 for their loss.)

The other question that came up related to two apparently contradictory statements in the presentation, the first that the Mexican authorities had taken Pelícano‘s sails ashore prior to the Texians’ attack, and the second, that once the vessel had been taken, the boarding party was able to get her underway in short order. Both those statements are true, but the presentation Thursday glossed over the specific details and so they sounded at odds. Again, Samuel Cushing:

One moment’s examination told us we had got to depend upon our own wits to get the prize to sea. The mainsail had been unbent and taken on shore, while the main-boom was immovably fixed by means of a large iron bolt, which had been driven through its jaws and the mainmast. The headsails had followed the mainsail on shore ; but the foresail, a large lug, yet hung in its brails. This was immediately shaken out, and the men were sent aloft to clear away the topsail and topgallant, who soon succeeded in loosing them, notwithstanding every foot-rope was cut. While these operations were progressing, a few of us had managed to construct a temporary jib out of a large awning, which we found aft upon the quarter-deck. In less than a quarter of an hour the cable was cut, and the vessel was forging ahead toward the northern headland of the harbor. The people on shore evidently expected an attack upon the town, as we inferred by the beating of drums, the sound of which we could hear distinctly ; and the lights flashing upon the battery, led us momentarily to expect a salute from that quarter. We were almost out of range, when the expected messenger came rushing over the water,  soaring high above our mast-heads, and dashing into the waves half a mile ahead of us. Ere another could be brought to bear, we were under cover of the merchant vessels anchored in the roadstead.

Please make plans to join the Hawkins Squadron for its next bimonthly meeting, tentatively scheduled for May 9, when we’ll have another fun meeting. The Texas Navy Association is a private, 501(c)(3) organization, dedicated to preserving and promoting the historical legacy of the naval forces of the Republic of Texas, 1835-46. The mission of the Texas Navy Association is to preserve and promote an appreciation of the historic character and heroic acts of the Texas Navy; to promote travel by visitors to historical sites and areas in which the Texas Navy operated; to conduct, in the broadest sense, a public relations campaign to create a responsible and accurate image of Texas; and to encourage Texas communities, organizations, and individuals, as well as governmental entities, to participate with actions and money, in pursuit of these goals. Membership in the Texas Navy Association is open to all persons age 16 and over who have an interest in Texas history and want to help support the goals of the organization.

In Galveston, the Charles E. Hawkins Squadron was organized in the fall of 2016, and meets on the second Thursday in odd-numbered months.