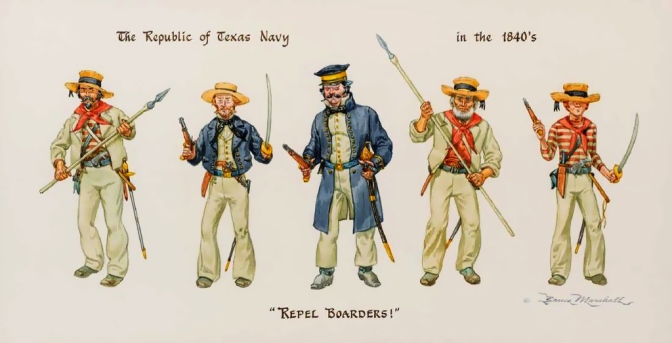 This original watercolor by the late Bruce Marshall, “Repel Boarders!” recently sold at auction. Two TNA officers participated in the auction, in an effort to secure the piece for the organization, but got outbid.

Marshall (1929-2015) received many honors during his lifetime, including being appointed as a Texas Navy Admiral. Much of his work focused on Texas history and the period of the Republic in particular, as reflected in his book, Uniforms of the Republic of Texas: And the Men that Wore Them, 1836-1846. Reproductions of his Texas Navy uniform illustrations are featured in the Texas Navy Gallery at the Houston Maritime Museum, now in its new home at 2311 Canal Street in Houston.

Marshall’s work has occasionally been criticized as not being very serious, but I think that badly misses his particular gift, and “Repel Boarders!” is a great example of that. There is a little bit of caricature in his figures, but it’s good-natured and fun; he’s not mocking anyone. In that respect, his work reminds me very much of that of the late Colonel Charles R. Waterhouse, USMCR (Ret.), who spent decades depicting the persons and events in the history of the Marine Corps from the American Revolution through Vietnam. Waterhouse’s works were occasionally grim, but often (like life itself) wryly amusing, as well (right). People sometimes confuse being serious about the work, which both Marshall and Waterhouse undoubtedly were, with being somber about it, which they most definitely weren’t.

Marshall’s depiction of Texian Navy uniforms here generally coincides with regulations, that called for blue jacket with yellow metal buttons, trousers, and a red vest; in summer the blue jacket and trousers were to be substituted by white duck, a plain cotton fabric similar to canvas. The officer at center wears a standard, double-breasted frock coat, left open, along with a regulation undress officer’s cap. The seamen all wear straw natural hats; while the regulations specified black (probably tarred) hats, there’s little doubt that straw hats like these were very common, as well. As Marshall notes in Uniforms of the Republic of Texas, there’s good evidence that these hats were woven on board by the sailors themselves, a distinctive style that was a cross between a traditional sailor’s hat with a flat brim, and the Mexican sombrero – something much more practical in the Gulf of Mexico.

It’s unfortunate the TNA wasn’t able to secure this piece, but others will come along. When you see them, please consider purchasing it yourself, or passing that information along to the group.