Most of you probably know that the historical Texas Navy didn’t have Admirals — the highest officer’s rank (as in the U.S. Navy at the time) was Post Captain, with the senior Post Captain going by the courtesy title of “Commodore.” The idea of having Admirals in the Texas Navy wouldn’t come along until almost a century later. 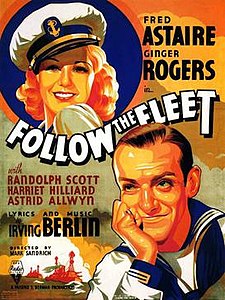 One of the first persons to be commissioned as an Admiral in the Texas Navy was Ginger Rogers (1911-95), the famous film star. In November 1935, she was commissioned as an Admiral int he Texas Navy by Governor James Allred, who presented her certificate at a New Years Eve party in Hollywood on December 31. Rogers had just completed Follow the Fleet with Fred Astaire and Randolph Scott, that would be released in February 1936. Follow the Fleet was the fifth of ten films starring Fred Astaire and Ginger Rogers released between 1933 and 1949, that made them one of the most famous pairings in American movie history. Rogers was also appointed an honorary Texas Ranger in 1936 while on the set of her next film with Fred Astaire, Swing Time.

TNA Past President Admiral Jerry Patterson recently came across this clipping from the San Antonio Express, dated February 23, 1936 — coincidentally (or not) just before Follow the Fleet was to open at the Majestic Theater there — that includes a reproduction of the actual commissioning certificate, signed by Allred and Texas Secretary of State R. B. Stanford. Allred told reporters at the time, “Texas is proud of Ginger and the Texas Centennial is a good time to show it.”

We couldn’t agree more. Here’s a clip from Follow the Fleet.