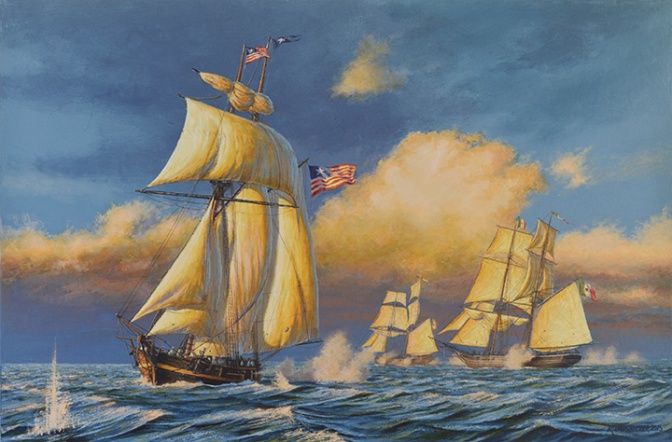 “Parting Shot: Invincible Off Galveston, 1837″ by by Peter Rindlisbacher.

Texas Navy Friends and Colleagues:
Following is the quarterly report of the Search for the Invincible Committee. The TL:DR version is, the Phase I magnetometer survey of the designated site is cleared to begin; the funding and necessary permits are all in place.
_______________
Quarterly Report
Search for the Invincible Committee
Texas Navy Association
October 13, 2018
In our committee’s last report, in July 2018, we outlined two sets of estimates for doing the Phase I Survey of the current Invincible target area. One of these vendor’s estimates was recommended, to complete a magnetometer survey of the target area in the hope of locating likely targets that might be refined and followed up on in later, Phase II testing. At that meeting we also discussed plans for raising funds for the Phase I Project, estimated at about $15,000.
I’m pleased to report that, with the assistance of numerous Admirals from across the TNA, we’ve met all the quarterly goals we laid out for the project in July. Sufficient funds have been raised to date to cover the costs of the Phase I magnetometer survey, although additional funds will be needed for follow-on work after that is completed. A well-qualified nautical archaeologist has been selected to perform the survey, permission has been secured from the City of Galveston, that holds title of the property, and the survey permit has been approved by the Archaeology Division of the Texas Historical Commission. We are now free to begin the Phase I Survey at any time.
The fieldwork associated with this survey is expected to take about five days. That has not been scheduled yet, and is dependent on other commitments of the archaeologist, weather forecast, and so on. Due to the sensitive nature of the location, we will not make the dates of the fieldwork public in advance. We hope to have the fieldwork completed by the end of the year, with report on that fieldwork to be presented to the Board of Directors at the January meeting. The full analysis and reporting of the Phase I Survey will likely take a little longer, and will provide the basis for planning the next phase of the Search for the Invincible.
The survey area is a 1000-foot-square grid (approx. 23 acres) near the eastern end of Galveston Island, under the beach. The survey will be conducted by the archaeologist pulling a lightweight cart across the area in lines, 25 feet apart, carrying sensitive equipment that measures fluctuations in the Earth’s magnetic field. These fluctuations are usually caused by masses of iron-based materials, such as iron and steel, that would not be naturally occurring in this region. Because that area at the eastern end of Galveston Island has never been developed, it is likely that if there are significant amounts of iron located, they originally formed part of the shipwreck. Although many ships were lost at the entrance to Galveston Bay over the years, this location conforms closely to the historical record describing where Invincible was wrecked in August 1837. Although there were attempts to salvage the schooner after her loss, we believe that there would be significant amounts of iron still present near the site, including (possibly) cannon, anchors, chain, galley stove, and a wide variety of ship fittings. These things may be scattered over a relatively wide area, as the ship was probably battered severely by Racer’s Storm, a hurricane that devastated Galveston Island several weeks later.
The archaeologist selected, Robert Gearhart, is owner and principal of BOB Hydrographics (cited in our last report as “Company B”), that specializes in hydrographic surveys supporting infrastructure and environmental projects on coastal and inland waters. Prior to establishing BOB Hydrographics, Gearhart served as hydrographer and marine archaeologist with several firms, notably with PBS&J, Inc. (1998-2010) and Espy, Huston & Associates (1984-92), that did extensive work surveying, recording, and analyzing shipwrecks in Texas coastal waters. Gearhart holds an BA in Anthropology from Iowa State university, and an MA in Anthropology from the University of Missouri – Columbia.
Gearhart led the archaeological team that recovered the remains of the Civil War gunboat USS Westfield, that was blown up at the end of the Battle of Galveston in 1863, and was long thought to have been lost. Of particular relevance to his proposed role on the Invincible Project, Gearhart authored the chapter, “Archaeological Interpretation of Marine Magnetic Data” for the The Oxford Handbook of Maritime Archaeology, published by Oxford University Press in 2014.
Next Steps
The next steps after completion of the fieldwork and analysis of the data will be entirely dependent upon what that data shows. We hope that the magnetometer survey will identify tight clusters of iron-based objects, that will allow us to begin planning for more invasive testing, e.g. coring. It is at least equally likely that the magnetometer survey will provide data that needs to be refined using additional magnetometer work, or some other remote sensing technology in order to move to Phase II testing. It is also possible that this magnetometer survey will not reveal any significant targets, or target so widely scattered that it will make it difficult to prioritize them on how to proceed. All will depend on the detail and quality of the data collected in this initial site survey.
There will be some minor adjustments to the Search for Invincible Committee for 2019, that will be announced soon.
Acknowledgments
Finally, I would like to acknowledge some of the people who have helped bring this project together over the last year, without whom we wouldn’t be where we are. These include current TNA President Adm. Richard Hatch, Past President Adm. Jerry Patterson, Past President Adm. Bill Turner, Adm. Jeff Corbin of the Tom Toby Squadron, Adm. Dave Haglund of the Search for Invincible Committee, Adm. Jeff Kilgore, Adm. Chester Barnes, Adm. Paula Morris, and Adm. Tom Oertling.
A very special thank you and Bravo Zulu goes to the Tom Toby Squadron, that organized the Warbird flight raffle that helped fund this phase of the project.
Respectfully submitted,
Andrew W. Hall
Interim Chairman
___________