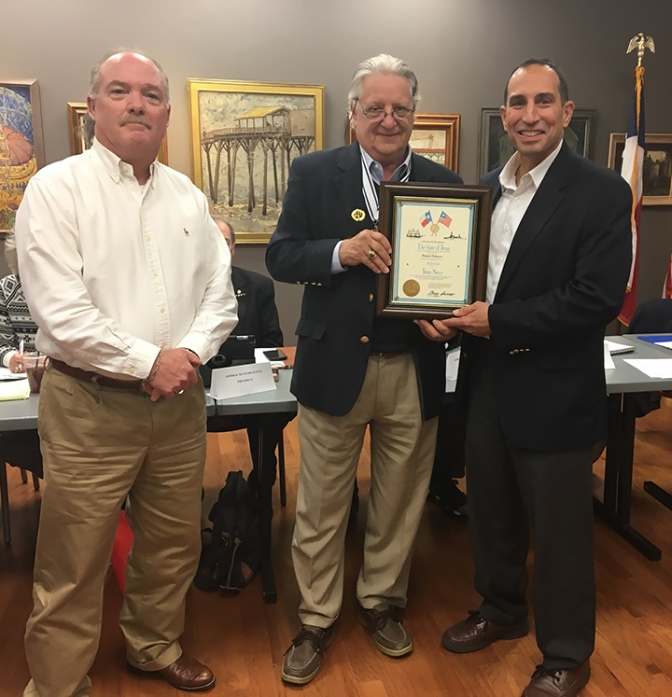 Congratulations to Rear Admiral Michael “Mike” Rodriguez, USMS (right), who on Saturday received his commission as an honorary Admiral in the Texas Navy, signed by Governor Abbott.  The commission was presented by (above, left and center) Texas Navy Adms. Butch Spafford and Chester Barnes, at the quarterly TNA Board of Directors Meeting in Galveston.

In January 2017, Rear Admiral Rodriguez became the 15th Superintendent of the Texas A&M Maritime Academy in Galveston. Mike is a 1979 graduate of the United States Merchant Marine Academy at Kings Point. After graduation, he sailed as a ship’s officer aboard US-flag vessels for 17 years.

In 1997, Mike returned to Kings Point as an Academy Training Representative. His responsibilities included supervising the shipboard assignments and training of hundreds of the Academy’s midshipmen. He also taught undergraduate business and several courses in maritime operations to military and industry professionals through the Academy’s continuing education program.

In 2009, Mike joined the Senior Professional Staff of the House of Representatives’ Subcommittee on Coast Guard and Maritime Transportation. During his tenure on the Hill, the Deepwater Horizoncasualty occurred and Congress passed, and the President signed, a sweeping Coast Guard bill that addressed several aspects of the Coast Guard’s operations and maritime safety.

Mike serves as a Captain in the Navy Reserve. In 2006, Mike and several other reservists were deployed in support of special operations in the Indian Ocean. From 2011 through 2014, Mike served in several active duty assignments supporting military sealift and maritime security.

In January 2017, Mike became the 15th Superintendent of the Texas A&M Maritime Academy in Galveston where he is responsible for the education and training of 556 students in the Academy’s Corps of Cadets.

The Texas Navy Association is a private, 501(c)(3) organization, dedicated to preserving and promoting the historical legacy of the naval forces of the Republic of Texas, 1835-45.