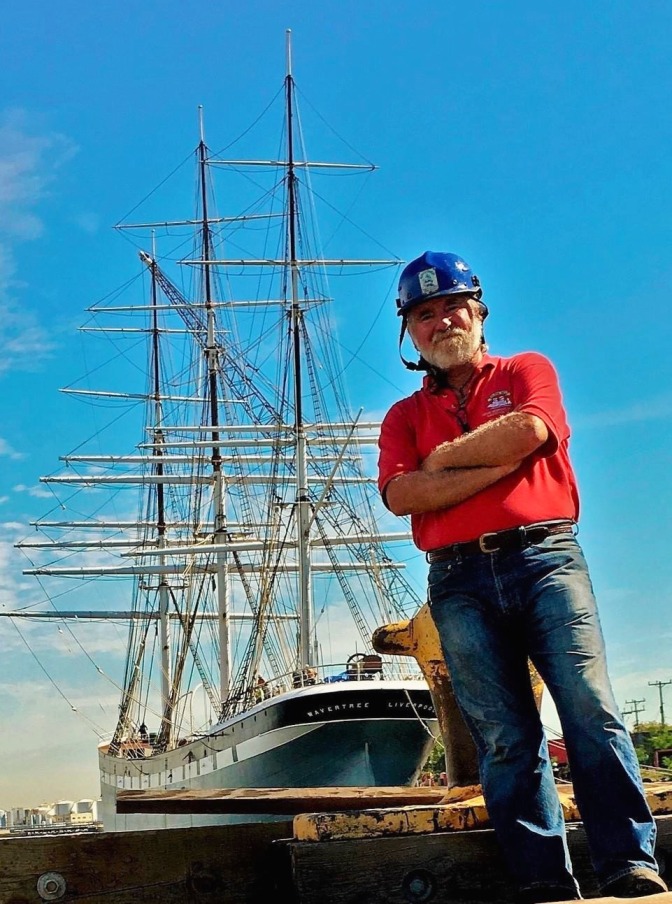 Join us Thursday evening, July 6, at Fisherman’s Wharf Restaurant in Galveston for guest speaker, Jamie White, past director of the Texas Seaport Museum and the historic 1877 Iron Barque Elissa and an Admiral in the Texas Navy Association. Captain White will give a presentation on “Sailing Elissa ~ a Square Rig Primer.” Captain White will present a lecture on the dynamics of setting sail aboard and maneuvering the official tall ship of Texas, Elissa, and how ships of the Texas Navy would have been similarly handled underway during battle.

Having worked in the traditional rigging and square-rig sail training industry since the early 1980s, Captain White has built an extensive knowledge and understanding of traditional sailing ships and their operational and restoration/maintenance and educational outreach requirements. He has sailed over 30,000 miles as bosun, mate, or master on many square-rigged & traditional vessels including: HMAV Bounty, the three-masted barque Elissa, topsail schooner Californian, galleon Golden Hinde, barque Star of India, brig Pilgrim, schooner Adventuress, 3 masted schooner Jacqueline, square-topsail ketch Hawaiian Chieftain, brig Lady Washington, schooner Atlantis, and the brigantine Soren Larsen. He served as Chief/Master Rigger on the three-masted barque Glenlee, the four-masted barque Moshulu, the three-masted ship Balclutha, and the three-masted schooner C.A. Thayer. Captain White has served as a rigging consultant on the the four-masted ship Falls of Clyde, the three-masted ship Discovery, and the three-masted barque Polly Woodside. Most recently he spent much of 2016 supervising and directing the $3.5 million rigging restoration of the largest wrought iron sailing ship in the world, the full rigged ship Wavertree, launched 1885. He has served as both Master and Education Coordinator on the brig Lady Washington in 1988-89.

Captain White has crossed the Equator three times under square-rig, and has had the good fortune of working on several Hollywood movies as a consultant, sailor, or rigger, including the last two Pirates of the Caribbean films and the 1984 Mel Gibson and Anthony Hopkins film The Bounty.

The event will begin with a meet-and-greet and cash bar at 6:30 p.m., with dinner and the presentation beginning at 7:30. Attendees can order from the regular Fisherman’s Wharf menu, and will be responsible for purchasing their own food and drinks. Those wanting to attend should RSVP to Adm. Butch Spafford, (409) 239-three one eight two, or by e-mail to admspafford-at-gmail-dot-com

The Texas Navy Association is a private, 501(c)(3) organization, dedicated to preserving and promoting the historical legacy of the naval forces of the Republic of Texas, 1835-45. In Galveston, the Charles E. Hawkins Squadron was organized in the fall of 2016, and meets on the first Thursday evening in odd-numbered months at Fisherman’s Wharf Restaurant.