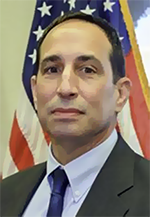 The Hawkins Squadron’s special guest this coming Thursday evening will be Rear Admiral Michael “Mike” Rodriguez, USMS (right). In January, Rodriguez became the 15th Superintendent of the Texas A&M Maritime Academy in Galveston. Rear Admiral Rodriguez is a 1979 graduate of the United States Merchant Marine Academy at Kings Point. After graduation, he sailed as a ship’s officer aboard US-flag vessels for 17 years.

In 1997, Mike returned to Kings Point as an Academy Training Representative. His responsibilities included supervising the shipboard assignments and training of hundreds of the Academy’s midshipmen. He also taught undergraduate business and several courses in maritime operations to military and industry professionals through the Academy’s continuing education program.

In 2009, Mike joined the Senior Professional Staff of the House of Representatives’ Subcommittee on Coast Guard and Maritime Transportation. During his tenure on the Hill, the Deepwater Horizon casualty occurred and Congress passed, and the President signed, a sweeping Coast Guard bill that addressed several aspects of the Coast Guard’s operations and maritime safety.

Mike serves as a Captain in the Navy Reserve. In 2006, Mike and several other reservists were deployed in support of special operations in the Indian Ocean. From 2011 through 2014, Mike served in several active duty assignments supporting military sealift and maritime security.

In January, Mike became the 15th Superintendent of the Texas A&M Maritime Academy in Galveston where he is responsible for the education and training of 556 students in the Academy’s Corps of Cadets.

The event will begin with a meet-and-greet and cash bar at 6:30 p.m., with dinner and the presentation beginning at 7:30. Attendees can order from the regular Fisherman’s Wharf menu, and will be responsible for purchasing their own food and drinks. Those wanting to attend should RSVP to Adm. Butch Spafford, (409) 239-three one eight two, or by e-mail to admspafford-at-gmail-dot-com

The Texas Navy Association is a private, 501(c)(3) organization, dedicated to preserving and promoting the historical legacy of the naval forces of the Republic of Texas, 1835-45. In Galveston, the Charles E. Hawkins Squadron was organized in the fall of 2016, and meets on the first Thursday evening in odd-numbered months at Fisherman’s Wharf Restaurant.