On December 14 the 2016-17 Talisker Whisky Atlantic Challenge will get under way. This is a transatlantic race from La Gomera in the Canary Islands to Antigua in the West Indies.

It’s not a sailing race — it’s a rowing race.

It typically takes each team 40-45 days to make the crossing. There are twelve teams competing this year. There are teams of four, three, two, and solo crews. There are three American teams this year, including the American Oarsmen, three young men from the Houston, Texas area. The rules are simple enough — they cannot receive any outside assistance or support, and have to carry everything they need with them. There are no support vessels; if they have an emergency, they will have to rely on a passing vessel for assistance. 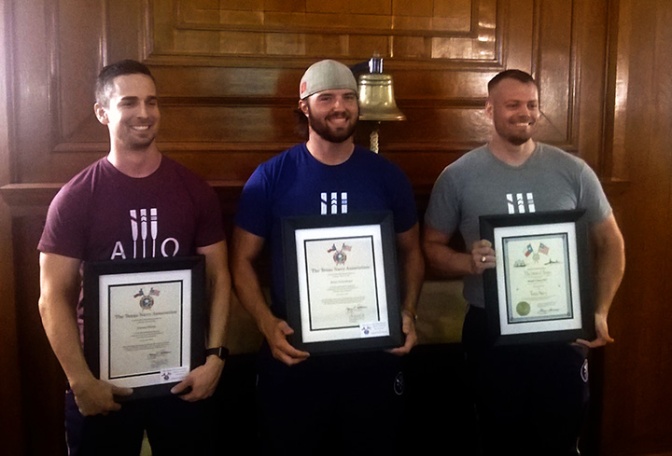 Three native Houstonians — Michael Matson (r.), David Alviar (l.), and Brian Krauskopf (c.) — will depart the Canary Islands to the coast of Africa on a 3,000 mile journey, unsupported across the Atlantic Ocean.  Swells, exhaustion, hunger, sleepless nights, total isolation, and an unforgiving sea are a few of the obstacles between that stand between them and crossing an ocean.  Determined, resolute, and eager to champion their causes, nothing will prevent them from making this a reality.

Carrying all their own food and water, they will row across the waves undaunted in their mission compete in the 2016 Talisker Whisky Atlantic Challenge.  Using only oars as a power source, they plan to shatter three world rowing records:

All three oarsmen were commissioned as Admirals in the Texas Navy by Governor Greg Abbott.  Skipper Mike Matson received his commission first followed by commissions for his crew Brian Krauskopf and David Alviar.

Anne, the American Oarsmen’s trusted rowboat, is now a commissioned ship in the Texas Navy – she will be the first vessel in over 150 years to hit the high seas under that title. The boat is named for Anne McCormick Sullivan, a Houston firefighter who lost her life in the line of duty in 2013.

One thought on “The Atlantic Challenge: One Week to Go!”