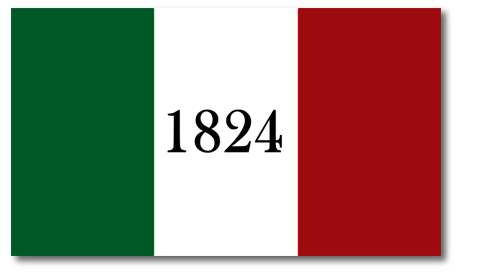 The first ensign flown by Texas Navy warships was probably the Tricolor of the 1824 Mexican Constitution. (This flag is best known as the “Alamo flag,” although it was probably never actually flown there during the siege in February and March 1836.) The 1824 Tricolor was adopted by the Texian provisional government on November 29, 1835 for use on privateers and “any vessel” operated on the authority of the government. The flag represented the Texians’ original allegiance to the 1824 Mexican Constitution. The Texian schooner Liberty flew this ensign in January and February 1836, and probably in early March of that year when she captured a Mexican schooner Pelicano at Sisal in the Yucatán.